We wouldn't get anything done if it were not for Airstream Wednesdays. We started this weekly event sometime back in November, and many a great things have been accomplished in Blue Moon on this mid-week-day! It all started as our island winter set in last year, we convinced a solitary friend -Michael- to stay on past summer and try out the colder months with us. Desperate to keep him here (to entertain us), we decided on a weekly dinner and Airstream work-night. And so was born Airstream Wednesdays. Michael has been enormously helpful in this project. He is faithfully here every week to take part in the most un-enjoyable tasks, from stripping toxic paint, grinding rust off the frame, painting the frame, and drilling out hundreds of rivets. We would be lost without him! Sure, there are times when Airstream Wednesdays have turned into just Wednesdays, and we skip working on Blue Moon entirely and go straight to dinner and drinks, but as friends, we all agree not to feel guilty about those weeks. And our group is growing! About a month ago we acquired a new Airstream-Wednesday-participant, Morgan, who adds massive amounts of fun to our evenings! She works with me and now lives on the island full-time. As tonight is an Airstream Wednesday, the four of us are roasting a whole chicken, making bruschetta, and having the appropriate accompanying beverages (wine, margs, whiskey gingers??). Oh yes, and we will also attempt to finish reinforcing the trailer's frame and weatherstrip Blue Moon's door...maybe. 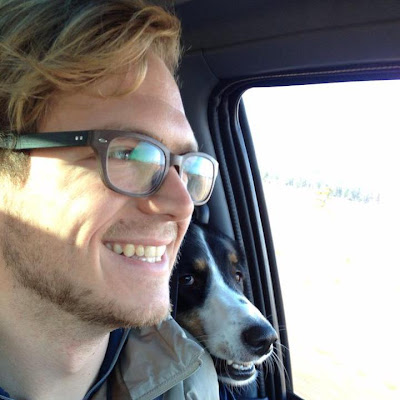 Michael also likes our dogs, which we are forever grateful for because he is an awesome dog-sitter! 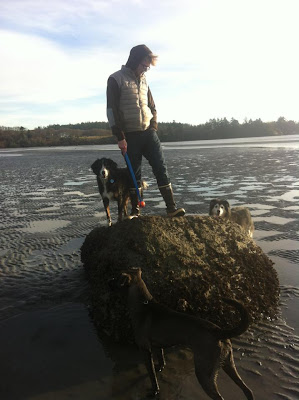 Michael in False Bay with the pups. I stole all of these photos from his facebook page - hope he doesn't mind! 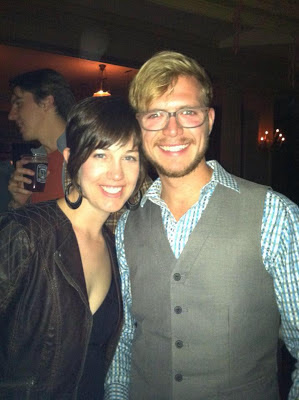 Michael and his lovely lady, Kira, who lives in Portland but is also being recruited to live on our island :) 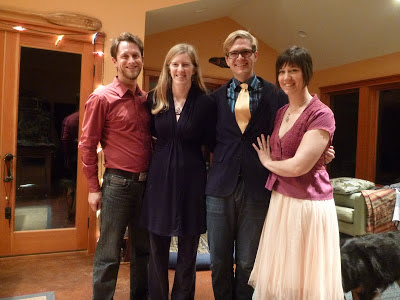 The four of us dressed up for Island Prom (aka New Year's Eve)!