So We Bought An Airstream... 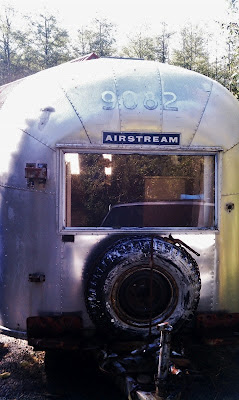 On September 5, 2012, we became the official owners of an airstream! She is a 1963 Land Yacht International Overlander 26'. Whew, if that ain't a mouthfull! We named her Blue Moon because she came to us under a beautiful island blue moon. After quickly becoming disenchanted with the price of owning a house here, we decided to seek other inspiration from the tiny house people, like Tumbleweed Houses, Airstream owners, and many others. The idea of buying an old trailer and making it our own was very exciting (and much cheaper than buying a house!). We started scanning airstream and argosy trailer classifieds for the right one. After months of looking, and dismay settling in, I finally put a wanted ad up on craigslist describing our desire and budget. A few weeks went by and out of the blue an email came through from some folks not more than three miles down the road - they had an airstream and were too busy to get around to renovating it - did we want it for $2,000? We zoomed over to take a look - poked and prodded all of the cabinets, chassis, and carpet (*ew). We went home that night with airstream dreams and a promise to call in the morning with our decision. The very next morning the owners sentimentally signed over the title to us and she became ours. J towed her home to our driveway behind the Astro van and I "supervised," driving behind and providing the break lights/turning signals from the Beetle. Over the next several days we took measurements, foamed out active wasp nests, and emptied drawers and cabinets of various "presents" from previous owners. Safety glasses/dust masks are a must! Blue Moon has a nice aluminum shell, and then the "nice" ends. When you step inside the door, which is held shut by a bungee-cord, 1963 + 49 years of not much love greets you immediately. The plan is to completely gut her and put in a whole new floor. Then the fun will begin; turning Blue into an off-grid tiny house on wheels! Follow this blog to join us in our remodeling, renovating, restoration fun! 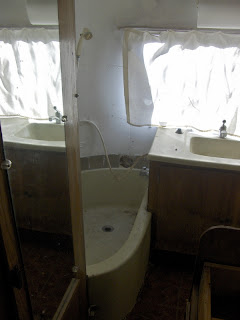 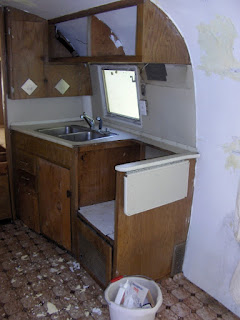 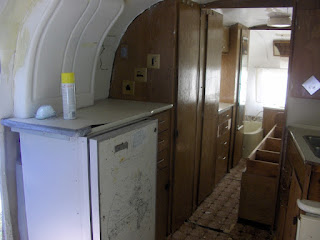 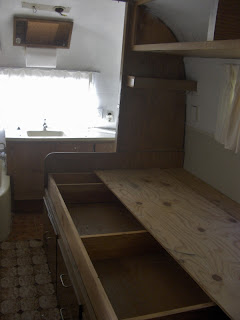 Posted by Traveling Osprey at 9:40 PM