Of Mice and Maui

'Twas the night before our vacation, and all through the house, not a creature was stirring...except for a mouse. We had all been nestled snug in our bed, and visions of wintering in our cozy Airstream were dancing in our head. Then out on the rear bumper there rose such a clatter, I sprang from the bed to see what was the matter. Away to the window the mouse flew like a flash, raced up and down the screen and out the trailer in a dash!

I know, it may be a little early for holiday lyrics, but with the weather here, we're feeling the force of winter. Let's rewind...  Two weeks ago J and I booked a totally spontaneous trip to Maui (wahoooo!) The forecast looked brilliant there and we both had the time off. Flights were a darn good deal so we packed our bags. There was the issue of this mouse, however. If you have ever been kept awake at night by the clatter one little rodent can create, or the agony of knowing this small furry creature is SOMEWHERE in your house and you can hear it but not see it and therefore simply cannot sleep, you can understand J's pain. As I snored peacefully, he vigilantly kept watch over the kitchen cabinet that seemed to be making scratching noises and producing little brown turds all on its own. And then, suddenly, a flash of gray fur! Let's just say our Airstream door has never really closed all the way, and we actually saw this little mouse leave through the crack in the bottom of the door -while it was closed. We couldn't leave our wonderful dog-sitter, Morgan, with a third furry friend to deal with on her first Airstream sleepover while we were on vacation! Necessity is the mother of invention, as they say, and J went to work sealing off the door. It was time anyway--the nights had been getting cooler for sure. Little mouse was used to his racetrack pathway in and out of Blue Moon so J figured he didn't even need to bait the mouse trap, and that said mouse would just run right over it in his haste to get to our crumbs. I was totally skeptical. But, on the morning of our Maui departure, there was his cute face (*dead*) in our mouse trap. We both momentarily felt sad because he was really cute, then ceremoniously bagged him and tossed him. Whew.

We left our little island one week ago while it was still glowing in the amber light that I've grown to love out here each September. But, it was time for a vacation! It was knockout b-e-a-utiful on Maui. We snorkeled with a gazillion fish, 6 massive sea turtles, and did some serious beach lounging. Despite developing a nasty cold mid-trip, I still got on the plane home feeling a little lighter. We returned to Seattle late at night and crashed on our friends floor until morning. I don't know why our friends live in Seattle. I have told them this. When we woke up to a total deluge of rain pelting the window with massive force, I said, "I don't know why you guys live here." I sincerely love to remind them that the island gets significantly less rainfall than their dreary city (and they know this because they used to live on the island and are always tempted to move back and I want them to so I have no shame in pestering them with these type of comments). But, they would not budge from their cozy apartment that day, so after a delicious breakfast with our beloved friends, we drove back to the ferry landing to catch the boat home. I said I would call them when the sun was shining on the island just to rub it in. But, the deluge did not stop. The ferry pitched and rocked in the rough seas all the way home and both J and I were a little land-sick when we got there. Bit of a shock from our tropical island vacation paradise, to say the least.

But miracle of miracles, we came home to hot showers! As you know we don't have a shower in Blue Moon, and sadly the season for solar showers ended about 3 weeks ago- when even on sunny days the shortening daylight hours just weren't long enough to heat up our 5-gallon bags for evening showers anymore. We'd been taking coin showers at the harbor but we had a call in to the owners of our property to see if there was a chance they wanted to fix their water heater in their old trailer up here so we could take showers in it. Running. Hot. Water. Uh-mazing!

After our blissful showers we hit the sack - me still a little sick from my cold. It was still absolutely pouring down rain. Sleeping under a tin roof in a rainstorm takes some getting used to :) Around 3 am I woke up coughing and had to sit up in bed to blow my nose. While sitting there, a cold drop of water fell on my head. And then another drop. Drip, drip, drip...J turned the light on and we discovered that the skylight over our bed was leaking. So at 3am in the pitch-black and the pouring rain, poor J was running around outside with a ladder tarping our skylight. Welcome home. With the addition of the tarp, we had officially entered the dreaded trailer trash land. Tarp on the roof, towel on the bed comforter, we miraculously slept on and didn't wake up until late this morning.

After spending the day at Morgan's and recovering from the shock of re-entry into our real life, here's what we fall asleep with tonight... 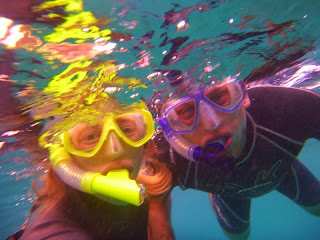 Posted by Traveling Osprey at 11:40 PM