We had a bit of excitement up here on the mountain on Saturday night. After nearly a 2-month hiatus of doing very little work on our Airstream (J's had a busy summer guiding) - we decided to finally tackle putting on our cabinet faces! 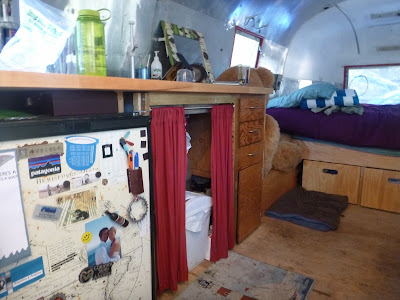 We've had temporary cafe curtains under the sink that I was excited to get rid of, although Maggie enjoys the free smells and easy access to the garbage can - blarf :( 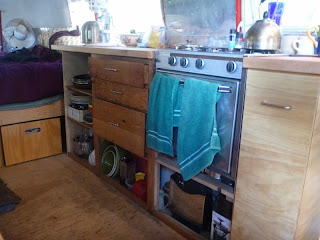 And here's what the other side of the kitchen looked like. The dishes on the bottom tended to get filled with dust and had to be wiped out before every use, which I was ready to not have to do! 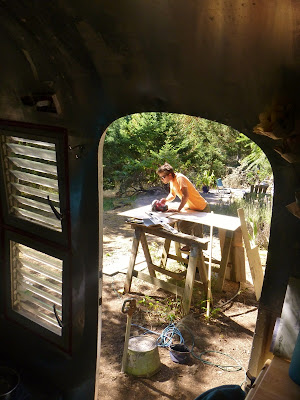 It was a beautiful afternoon for us both to be off work and J not tired from guiding any overnights recently. He cut and sanded the cabinet faces and I stained them. 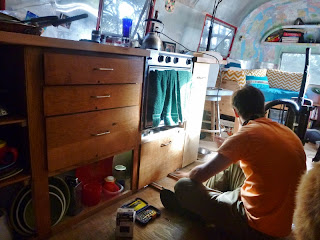 We took the puppies on a walk while the last bit of stain cured and then around 6pm J got ready to install them. The picture above is important because I took it just a few minutes before J accidentally cut into his pinky finger with some electrician's pliers. The cut was bad enough to make J wince, and we sat there for a few minutes (it was not a big bleeder, although his fingernail was cut in half!) and then decided to walk over to our landlords old trailer where there is running water to rinse it off. I grabbed a few first aid supplies to take with and bandage it afterwards. We got to the deck of their trailer and Jacob sat down outside, saying he didn't feel well. He turned green as the grinch and I thought for sure there was puke in his future. But, for better or worse, he held it in, and instead, promptly had a seizure. J was sitting up against the wall and I held his head upright while his whole body convulsed and went rigid, his eyes wide open and staring up into the light unnaturally. Jacob will tell you that during this time his mind was racing through a picture flip-book of memories and he was desperately trying to focus on one. What a wild ride it must have been! In my mind, I knew Jacob was having a seizure, and I was grateful for knowing that (thank you Diamond Peaks Ski Patrol OEC training), and for knowing that he would wake up, and that it was not something even crazier. That being said, when all the color drained from him and his eyes turned yellow, I was tempted into being scared for the love of my life, and knew I would need more help.

J went from totally rigid to a sack of potatoes and crumpled forward, unconscious. I tried to unfold him and get him to lay down, but could not move him from his propped up position. At this point I knew I would have to leave him and go for the phone, which was back at our Airstream. I leaned Jacob's head against the nearby post and sprinted for the phone and called 911. By the time I made it back and was on the phone with the dispatcher, J had woken up and was telling me he was ok, although he was still crumpled over! On-call medics Ryan and Steve from San Juan EMS arrived very quickly and had J lie down and hooked him up to all kinds of machines to begin monitoring his breathing, heart rate, etc. They were so thorough and caring and were in no hurry to throw him in an ambulance, which we both appreciated. After reviewing the day, we all determined that J was pretty dehydrated - somehow we had just missed drinking water that day, and the shock of the finger injury just put things over the edge. J was pretty whooped, and with the help of both medics, eventually made it back to our awesome sofa in our trailer. We were both happy to find out that paramedic Ryan is doing a Sprinter van conversion and therefore did not find our living situation entirely ridiculous - I believe he even said our trailer was "rad!" Once the medics were sure he was stable, they signed him off and left. At which point, I decided to lose my cool completely and had an emotional breakdown. 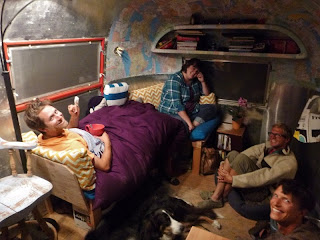 Thank you Morgan, Sox, and Andrew for coming up and solving this problem :) We are so lucky to have friends that won't hesitate to show up at a moments notice, and bring movies, oreos, ice cream, hard cider (for me only!) and laughter. It took several hours before J could get off that sofa - his body was definitely out of whack. 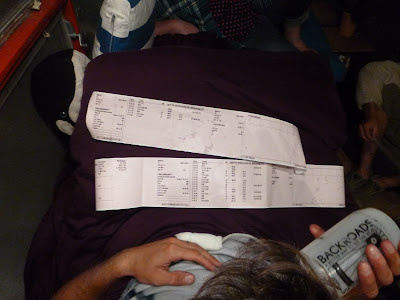 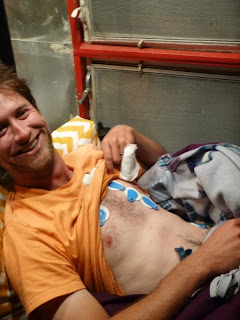 Now, we try to keep this blog clean, but that is in fact Jacob's nipple. Sorry 'bout that! Here's tired J with all his sticky hook-up pads from the heart rate monitor, and his bandaged finger. He said he didn't even want the EMT's to deal with his finger, so he made me do it after they left. I covered his eyes with Finn the stuffed whale while I did it :) 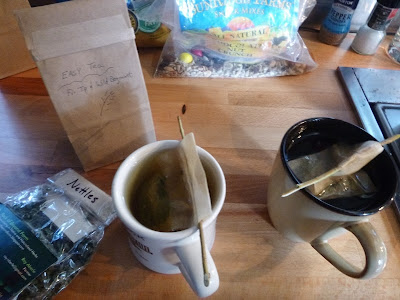 Sunday was a day of rest and recovery. J still did not feel anywhere near 100%. Fortunately our teas from Ray at Back of Beyond Farm had just arrived, and J was on to the Easy Tea - steeped fir tip and wild bergamot. 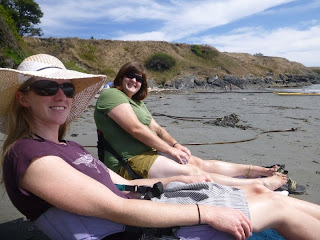 We went to the beach with Morgan to relax too. J napped (and drank lots of water!) and we had girl time. 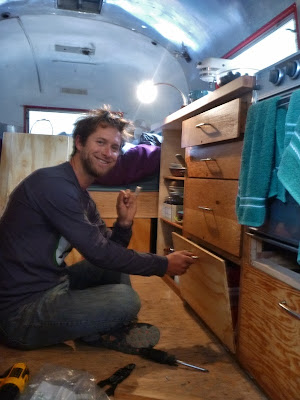 By Monday, it was back to work and J finally woke up saying he felt "excellent" which I was exceedingly grateful for, because my cooking repertoire was already nearing the end of its menu :) And last night, after he went on "the best" 2-hr mountain bike ride, he was back installing our cabinet faces. 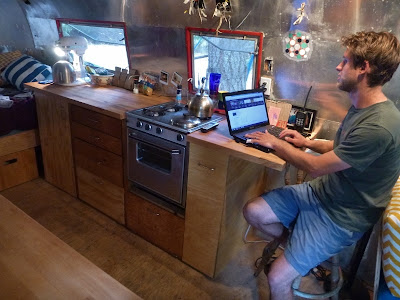 And wow do they look awesome! All the handles, hinges and hardware were salvaged from the original interior of our Airstream, as well as the dark wood. The lighter wood is the new stuff. 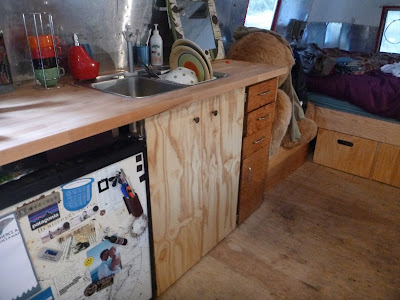 Double-doors under the sink - yay! 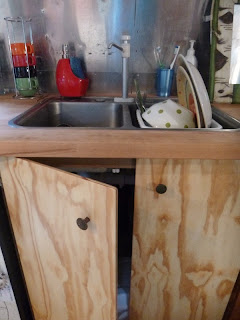 And that, is the story of our cabinets.
Thank you San Juan EMS for your quick response - we couldn't have asked for a better team to come up and help us out!