Last weekend we went to the hardware store, got ourselves some nasty chemical paint stripper and dove headfirst (with respirators on) into attempting to expose the shiny aluminum that we knew was underneath the 50 years of most likely lead-based paint inside the Airstream. After 6 coats of the nasty stuff, and both of us scraping with plastic scrapers hour after hour, we were pretty tired and here's what we had accomplished: 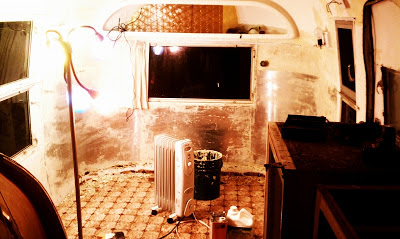 The aluminum was showing through, but a nasty film of something that we were pretty sure wasn't quite paint still remained. A little web research to our friendly Air Forums and we quickly learned about "Zolatone." It was a TOUGH layer of primer/auto body paint used in the 50s and early 60s. Someone said that they thought 1965 was the last year it was used in Airstreams. We have a 1963, ugh. Many folks had run out of energy trying to strip the paint from their aluminum and simply ordered new skins! No way we said, that would be way too much $$. So we went in search of an answer and stumbled upon this blog about another 1963 Overlander named Moonraker of all things! Citrastrip - a much less toxic stripper, and plastic razor blades (of all things!) are totally the answer! Two coats of the pink goo: 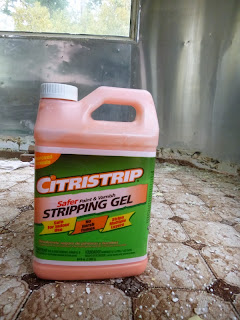 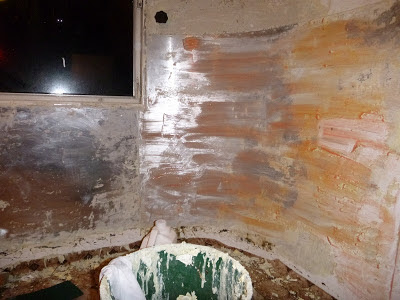 And some plastic razor blade scraping, then a quick shine with mineral spirits and Blue has some shiny aluminum walls to show off! We really like the way they look :) 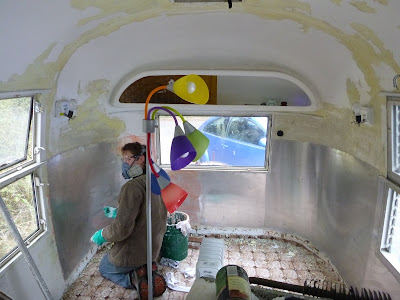 We also learned that the area above Jacob is actually fiberglass. Our trailer has fiberglass endcaps at both ends, so those parts will actually get painted. But we are hoping to expose the rest of the ceiling and walls into a nice light-reflecting aluminum. 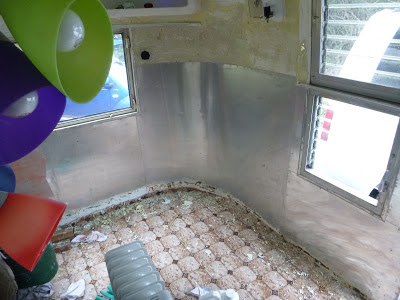 As I finished up scraping the walls, J went to work on another project. The original propane-electric heater was still stuck inside the trailer. In order to extricate it, the exterior heater vent had to be removed in order to get access to the screws keeping the heater in place! The heater came out and we were left with a hole in the side of the trailer. J is so creative - he removed the all-aluminum sheet that encased the original fridge (see below): 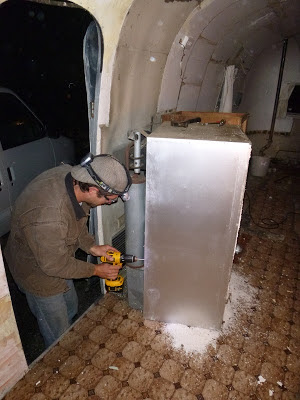 ...and created a patch for the trailer. The heater is the big box in the picture below on the left. The patch is now riveted on there and looks great! 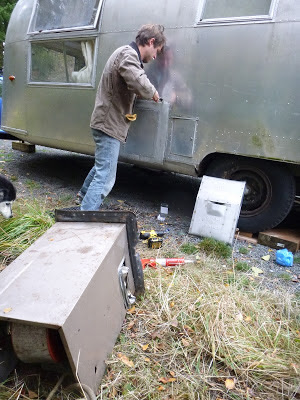 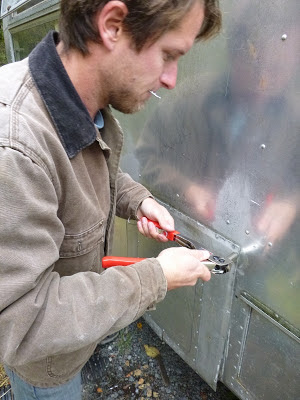 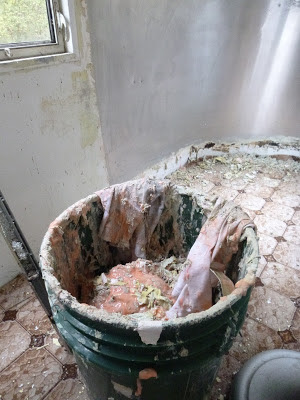 That's all for now folks...don't fall in my bucket of slime :) You should be able to subscribe to get email updates now if you'd like. Just enter your email address in the feedburner box up top.

Posted by Traveling Osprey at 5:26 PM